YECA Prays For & Participates In the People’s Climate March

NEW YORK CITY — YECA Steering Committee members and young evangelicals from across the country gathered together on Sunday, September 21st to take part in the People’s Climate March. The march, which started on the west side of Central Park and wove itself through Manhattan, was attended by nearly 400,000 people, making it the largest climate march in history. The gathering was scheduled to coincide with the UN Climate Summit held in New York City later that week, a convening of world leaders to pave the way for a climate agreement to emerge from the crucial COP meetings scheduled to take place in Peru this year and Paris next year.

Many young evangelicals traveled to the NYC area on Saturday and spent the night at the farm of John and Barbara Elwood, gracious supporters of the YECA movement. The Elwoods hosted a group of 14 students from Indiana’s Grace College, 15 students from Houghton College in Upstate New York, 3 students from Duke Divinity School, and 5 YECA Steering Committee members from DC, Grand Rapids, and North Carolina. The hospitality offered by John and Barbara allowed for fellowship and bonds to form between the young evangelicals before the march even began. 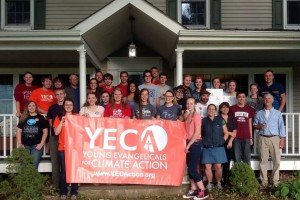 On the day of the march, these groups joined staff from the Christian Reformed Church’s Office of Social Justice, Gordon College Professor Dorothy Boorse, and other Christians in Central Park to participate in a prayer service. The liturgy focused on repentance for our sins against God’s creation and rejoicing in the hope of God’s redemptive covenant. The service concluded with “Our World Belongs to God”, a testimony developed by the Christian Reformed Church. YECA Steering Committee member Brittany Bennett reflects on the prayer service:

I was so thankful...to those who organized the service and liturgy. It meant a lot to be guided and have that space to worship, to express repentance on this issue, and to hope for the way forward. 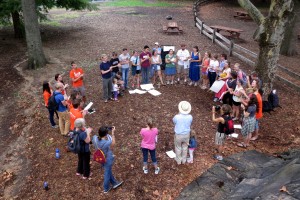 During the actual event, YECA and supporters marched in the Faith and Science section titled “The Debate is Over”. The section aimed to highlight that faith and science are not opposed to each other and can work together on climate action. Reflecting on the diversity of the march, Houghton college student Daniel Bellerose said:

The beauty of the march to me, lay in the unification of people from all different backgrounds for one common cause. I saw Christians, Buddhists, hippies, and scientists all marching together, raising one unified voice for climate action. It was immensely powerful.

Brian Webb, Sustainability Coordinator at Houghton College, saw this march as an opportunity to jump-start the climate conversation on campus:

Not only were our students able to learn about climate change, but they were able to boldly represent the cause of Christ by showing to the world that Christians DO care about climate issues, and that Christians ARE deeply concerned about its impact on the poor. This type of public witness will be critical in establishing Christianity's relevance in the 21st century and in maintaining a consistently Christ-centered approach to how we live out our faith… I'm so excited to see what these 15 students will do to ignite our campus on this issue.

Students from Grace College also shared some thoughts. Listen to them in this video recorded shortly after the march: 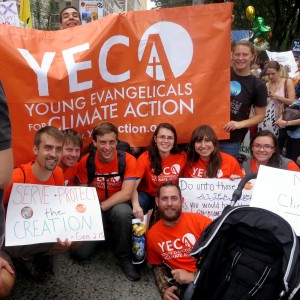 YECA is thankful for having taken part in this historical march and hopes to use the excitement generated from the event and expand the climate conversation. While marching was a great way to get the attention of our political leaders, we want to now work together with our church leaders to address climate change. If you are a young evangelical who did not make it to the climate march but still wants to stand up for climate action, please consider signing our petition to the National Association of Evangelicals. If you are not a young evangelical but still want to support the work of YECA, consider giving to our Fellows and Regional Organizers program: the 14 students from Grace College were brought to the march by Dugan Julian as part of his fellowship.