Y.E.C.A. Marches and Lobbies for Climate Action on Capitol Hill

The stifling humidity and record-setting temperatures were no match for over 200,000 moms, students, scientists, front-line community members, and other activists on April 29. The People’s Climate March 2017 drew hundreds of thousands of concerned citizens out into the streets for 370 separate marches across the country. Y.E.C.A. had members at several of these marches, but its largest presence was in the streets of the capital, where dozens of Y.E.C.A. members from all across the country marched for faithful climate action. 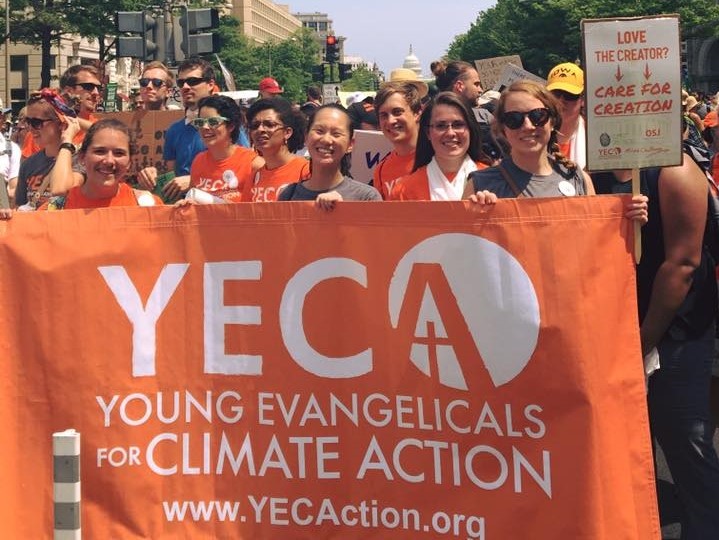 “We were swept up in the tide of thousands as they marched for climate justice; it was humbling,” said Judith Marklin, a senior at Houghton College, of the march. “And it wasn’t just a bunch of hippies, rather people from all backgrounds and generations that were united and moving as one. It was certainly inspiring.”

YECA’s participation in the march was part of a larger collaboration between partner organizations Climate Caretakers and the CRC Office of Social Justice that brought almost 100 evangelical Christians to D.C. for a weekend of marching, training, and lobbying on Capitol Hill. The weekend was called Acting in Faith: Evangelical Climate Advocacy Days.

After marching on Saturday, most participants stayed in D.C. for an all-day lobby training session on Sunday, April 30 and a lobby day on Monday, May 1. The lobby day began with a prayer vigil on the lawn of the Capitol, after which 25 Y.E.C.A. members joined 36 other participants to fan out across Capitol Hill and meet in 37 offices with one message: evangelical Christians want to see Congress show leadership on climate through strong, bipartisan legislation. 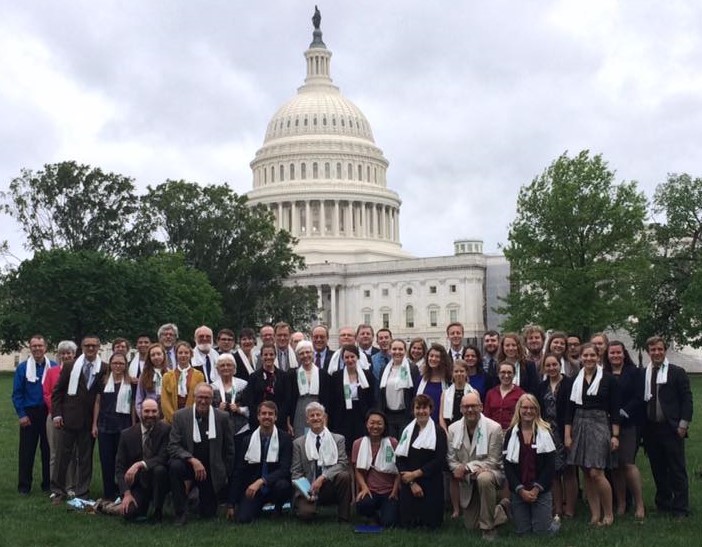 Acting in Faith lobby group in front of the Capitol

“It’s critical that the evangelical church have a presence at these major cultural moments,” said Kyle Meyaard-Schaap, national organizer and spokesperson for Y.E.C.A. “Acting on climate through marching and advocating is an opportunity for evangelicals to deepen in our discipleship to the Lord of all creation.”

“It's important that Members of Congress know that there are young evangelicals who care about climate action,” reflected Claire McWilliams, a Y.E.C.A. activist from Chicago. “I loved sharing with the world that my faith demands action on climate. I loved marching with fellow Christ followers, but lobbying was what I was most looking forward to and where I felt like we made the greatest impact.”

While Y.E.C.A. members spent most of the day spread out across Capitol Hill speaking with their own Members of Congress, the 20+ Y.E.C.A. members had two special meetings in the afternoon. The first was a face-to-face with Senator Whitehouse (D-RI), a champion for climate action and a relentless consensus-builder on Capitol Hill. He shared with the group why he is passionate about climate change, and encouraged them to continue the advocacy that they are doing. “I am more hopeful than ever that real climate legislation is within reach,” he told the group gathered in his conference room, “and you all a big reason why. 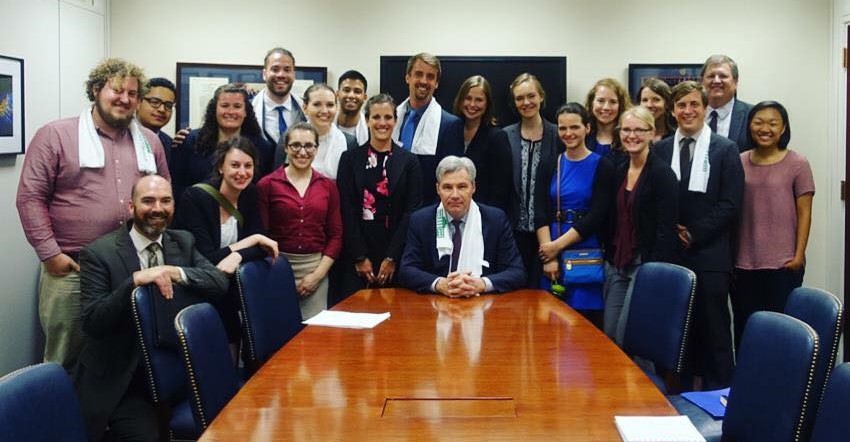 The second meeting was with the main energy staffer for Senate Majority leader, Mitch McConnell (R-KY). As the group filed into the leadership’s chamber inside the Capitol building, they were struck by the opportunity before them and by the power they had as young evangelical Christians to influence the national conversation around climate change.

After the dust settled at the end of the long day of meetings, the participants reflected on their experience.

“For the most part, the Members of Congress and their staff really appreciated our visits and were very attentive to what we had to say,” remarked McWilliams. “Going into meetings was initially intimidating, but now I look forward to my next opportunity for lobbying, whenever that may be!”

"This weekend was super inspiring," said Ohio resident David Wituszynski. "Not only did I get to meet a bunch of awesome people, but I learned that meeting with my elected representatives was way less intimidating than I would have thought. I hope to take these lessons - and these new friendships - to heart going forward, and look for ways to be involved here in Ohio."

“Lobbying was eye-opening,” reflected Marklin. “I am evermore grateful for the democracy in which we live. Of course, there can always be improvements, but lobbying put a face on the system. They are humans, just like me, and we can have conversations together. That is powerful.”

“One of the best parts of the lobby meetings was handing the members and staffers a letter signed by almost 300 other evangelicals Christians who couldn’t be there in person, but who also support bipartisan climate legislation, “said Meyaard-Schaap. “It was a powerful reminder of the great cloud of witnesses of which we are all a part as we do this important work.” 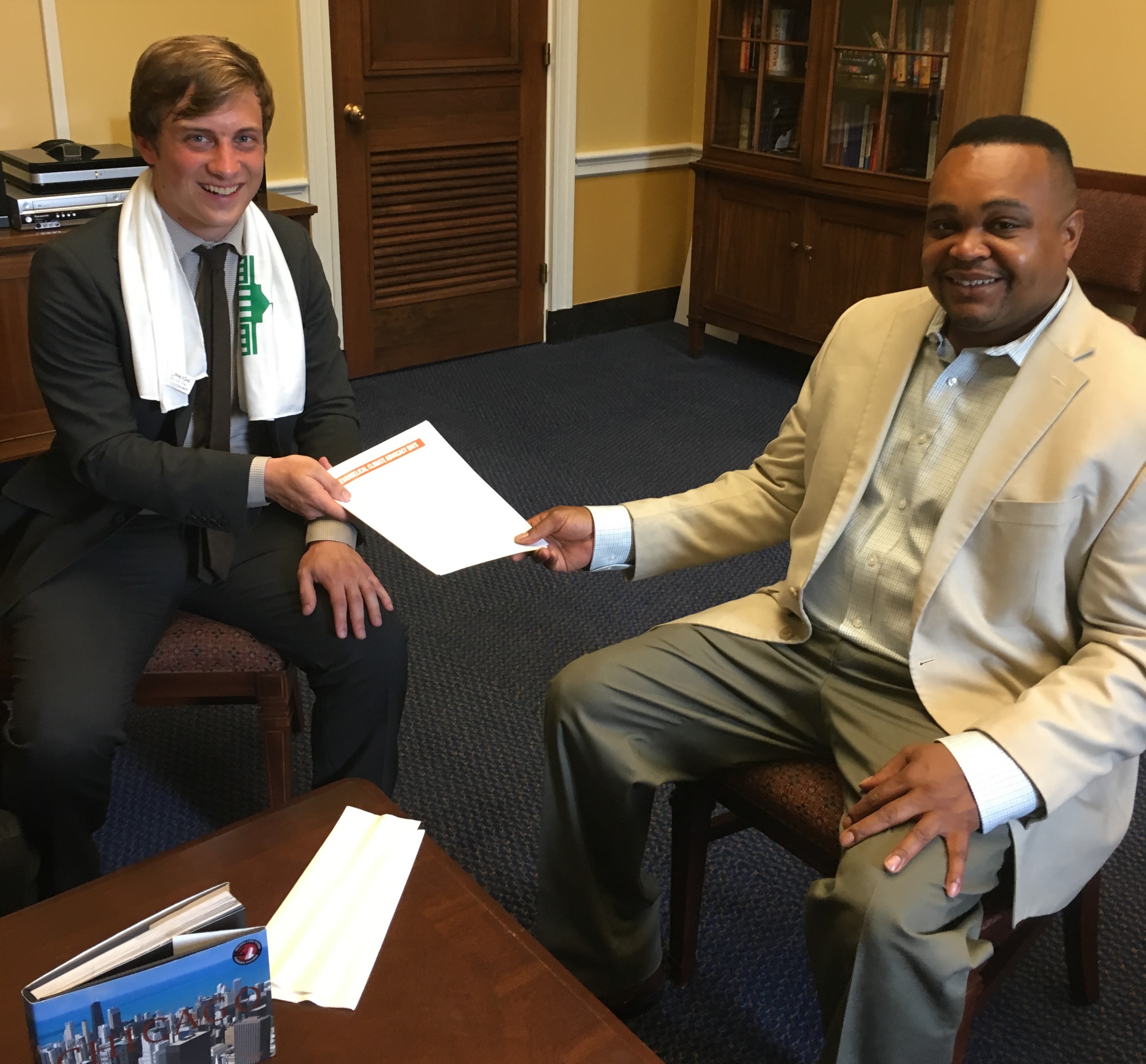