Late last month, several of us in the YECA family gathered for the 2015 Ohio/Pennsylvania Regional Summit at Malone University in Canton, Ohio. It was fitting that YECA’s first regional summit for cultivating young climate activists should take place a stone’s throw from the iconic Cuyahoga River, which - when it caught on fire in the summer of 1969 - helped spur a historic wave of ecological awareness and a generation of environmental activists in the United States. 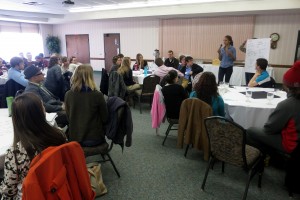 At the Malone Summit, we saw old friends and made new ones - lots of new ones! Nearly 70 young people came to the summit from campuses and organizations in Ohio (Ohio State University, Walsh University, Cedarville University, Malone University, and Rural Action), Pennsylvania (Geneva College), and New York (Houghton College). These young people came to the summit to learn more about how to be effective agents of climate action in their communities and to share stories about program and projects that have been successful around the Ohio/Pennsylvania region.

The day started with a conversation with former Congressman Bob Inglis (R-SC), who has been a leading voice in the promotion of a conservative, federal-level solution to climate change in the United States. He shared his own story of how he came to embrace the reality of climate change, and the importance of relationships in his work. He provided a language for understanding how people change - both on the social and personal level - and provided a clear explanation of his policy initiatives seeking to respond to climate change. In a political climate that is often hopelessly partisan, our conversation with Bob Inglis was encouraging and uplifting.

During the day, YECA leaders and summit participants shared insights and experiences in organizing, strategic planning, and bringing about change in their communities. The event then culminated in an afternoon strategic planning session, in which students gathered in groups to create climate action plans for their communities and present them to the other participants. These presentations reflected the great degree of diversity among the represented campuses, and it was exciting to see students explore creative and collaborative solutions that took their local contexts and institutional realities into careful consideration.

The people I met at Malone this past weekend are doing great things to bring about a more just and sustainable world in their local contexts. I was encouraged by their passion and dedication to lead their communities to care more for God’s creation. This weekend made me feel especially privileged to be a part of YECA and the movement of young Christians living out their faith through their care for creation and their action on climate change.