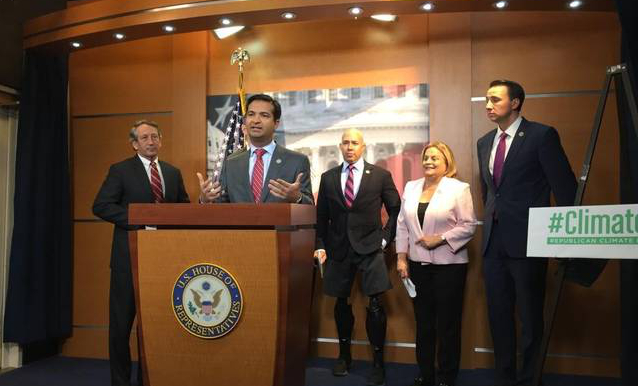 Rep. Carlos Curbelo, R-Fla., speaks to reporters at the Capitol about climate change on Monday, March 20, 2017. He is flanked by Republican Reps. Mark Sanford of South Carolina (from left), Brian Mast and Ileana Ros-Lehtinen of Florida and Ryan Costello of Pennsylvania. Photo Credit: Curtis Tate - McClatchy

March 15, 2017 | WASHINGTON, D.C.--A group of House Republicans led by Rep. Elise Stefanik (NY-21), Rep. Carlos Curbelo (FL-26), Rep. Ryan Costello (PA-6) introduced a resolution today calling on the House of Representatives to find economically viable solutions to the risks posed by climate change, citing "American ingenuity, innovation, and exceptionalism" as well as the "conservative principle to protect, conserve, and be good stewards of our environment.” This resolution is a reintroduction of a similar one introduced last year in the 114th Congress by a group of Republican lawmakers led by Rep. Chris Gibson (NY-19).

The resolution comes at a critical time as federal climate programs have been targeted by the new Trump Administration and as momentum toward national climate action has waned. As the Republican lawmakers who have introduced the resolution have remarked, bold action on climate need not be exclusive of clean energy innovation and job creation. In fact, argues the resolution, they are mutually reinforcing. In order to unlock the solutions needed to address the risks of climate change, conservative principles of innovation and conservation need to be a part of the discussion. As Congressman Ryan Costello (PA-06) states, “We should leverage conservative principles to develop innovative, economically viable ways to achieve this goal [of climate action], including through clean energy technologies."

YECA has long advocated for conservative principles and solutions to be part of the national climate conversation, and joined with 34 other national religious voices in welcoming this contribution to bipartisan dialogue on climate solutions. We are encouraged by the leadership of these Republican lawmakers, and urge others to join them. The time for debate about the existence of climate change is over, and it is time to begin a bipartisan conversation about solutions. As Rep. Carlos Curbelo (FL-26) states, "Our goal with this resolution is to shift the debate from whether climate change is real toward the tangible efforts to reduce carbon emissions and mitigate its effects."