"Any interest in joining us in NYC next Tue for our climate action prayer rally during the Prez Debate?"

This instant message appeared on my screen. It was from Ben Lowe, that guy I met for lunch a couple of weeks earlier, who was at the time the National Spokesperson and Organizer for the recently launched organization Young Evangelicals for Climate Action. 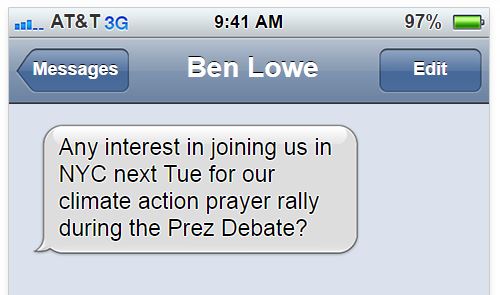 Until I had received that personal invite from Ben, I did not realize how deeply committed I was to the pursuit of climate change solutions, so much so that I would request time off of my new job and book a red-eye flight so that I could demonstrate together with a bunch of strangers from across the country. The trip to New York City to attend a prayer rally outside the 2012 Presidential Debate at Hofstra University would be my first of many events with Young Evangelicals for Climate Action, or Y.E.C.A. for short.

The closer I got to Hofstra, the thicker the atmosphere filled with the democratic concentration that surrounds high-profile political events. Campaign banners and government choppers filled the air, while media vans and activist groups filled the streets. It was a bit of a carnival, with people wearing pink or blue or white or black or whatever color their cause required. Creativity points went to the guy dressed up as Bane from that summer’s blockbuster The Dark Knight Rises, a not-so- subtle allusion to candidate Mitt Romney’s time as a venture capitalist with Bain Capital (if you hunt around on social media, there is a photo of me fist bumping with Bain Capital, while in the background there are some Orthodox Jews protesting American complacency regarding the occupation of Palestine, and because it was 2012 there were some scattered Tea Partiers and Wall Street Occupiers in the crowd).

There was an “open mic” stage for groups like ours; we used our time slot to make a short statement, offered a prayer for God’s creation, and then sang Amazing Grace. We then walked on over to a lecture hall where we could watch a broadcast of the debate that was happening right next door, and after the debate concluded we gathered together for a private time of reflection and prayer and fellowship.

Did we accomplish anything that evening? The cynics would say no: Superstorm Sandy’s trip to New York a few weeks later did exponentially more to put climate change on the radar of the 2012 Presidential election than our own convergence in New York City. Neither did climate change seem to be a make-or- break issue for any down-ballot candidate.

But I have seen the fruits of our efforts, both from that night and in the four years since. The grassroots media could not help but take notice that the largest environmental group that showed up also happened to all be Christians. One blogger did not know what to make of us, and called us "hippie evangelicals" -- the first and maybe only time that most of us had ever been called hippies.

And in the years to come, after I was invited to join the Steering Committee for Y.E.C.A., I got to witness Y.E.C.A.&#39;s transformation from being an obscure and ironic start-up to becoming a trusted authority on evangelical Christianity and climate change. We kept showing up at these critical moments in the democratic process, from massive climate marches to bureaucratic listening sessions, and people took notice.

In four years, we raised the level of discourse, helping to shift it away from guilt, blame, and despair and toward optimism, charity, and hope. When people want to write about evangelicals and climate change, we consistently offer a thoughtful-yet-urgent voice that did not quite exist before. Accordingly, our political leaders are taking notice, realizing that their once-predictable evangelical base (or lack thereof) is changing, and that those of us that are coming of age are tired of the arbitrarily partisan battle lines that have drawn around climate change for far too long.

Today, because of a last-minute decision by the Commission on Presidential Debates to host the first debate at Hofstra University again, I get to return to where it all began for me by participating in our second presidential debate prayer rally. While it has been exciting to watch our organization grow over the last four years, and encouraging to see responsible climate solutions put forward by our nation and the international community, this return trip serves as a reminder to me that the issue of climate change is as urgent as ever.

What do we hope to say with our repeat appearance? First, that as long as the potential for grave injustice exists, we are called to elevate the voices of the poor and marginalized who are disproportionately impacted by climate change. Second, that contrary to media stereotypes, we are compelled to act on climate because of, and not in spite of, our evangelical Christian faith. And finally, that we are ready to continue our public witness to the reality that God is actively seeking the redemption of His good creation, and no season of political gridlock can take that hope away from us.