From Project Leader to National Activist

You may have seen by now that one of Y.E.C.A’s members has been getting some serious national media attention. Lindsay Mouw, former project leader and Climate Leadership Fellow, never imagined that she would be featured on multiple national broadcasts and the front page of the Des Moines Register, but that’s exactly where she has found herself in recent days.

But how did she go from local activist to national leader?

Lindsay Mouw isn’t your typical environmentalist. Climate change and creation care were not derided in her conservative community in northwest Iowa; they weren’t even on the radar.

They weren’t on Lindsay’s radar either--that is, until she spent a semester abroad in New Zealand with the Creation Care Study Program (CCSP).

She was thoroughly transformed.

Having spent little to none of her life considering the role of Christians in caring for the earth and addressing the reality of climate change, she found herself spending months doing nothing else. Through the faithful shepherding of professors, mentors, and peers, Lindsay caught a vision of an expansive gospel in which Christ’s work of reconciliation extended to the entire created world, and where her calling was to join Christ in the work of loving the world and her global neighbor by caring for creation.

She returned to campus fired up by her expanded worldview, and found herself stuck. How could she align her studies and personal practices with these new commitments? Where could she find the community that she needed to help her grow and develop into this new way of living; these new patterns of discipleship?

An answer came at an unlikely time: the 2016 Republican presidential primary season. As presidential hopefuls flooded into the Hawkeye state to kiss babies and eat deep-fried, state fair butter on a stick, Lindsay found an organization of like-minded young people looking to put climate change on the 2016 ballot. Lindsay became a project leader with Y.E.C.A. and began following the presidential candidates to each of their events in order to ask them to lay out their plan for climate stability. Lindsay mobilized her peers to attend campaign rallies with shirts that read, “What about climate change” and she asked a direct question to every candidate except Donald Trump. She had found a community of like-minded Christians and had practiced habits of faithful climate advocacy. 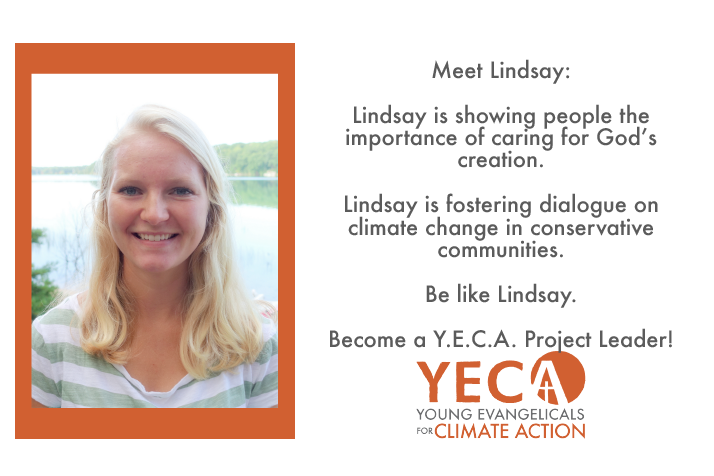 But she wanted to go deeper.

So as she headed into her senior year, she sought to take her project leaders experience to the next level. She applied for and was awarded one of Y.E.C.A.’s Climate Leadership Fellowships. It was an opportunity for Lindsay to receive focused training and support to bring her considerable leadership abilities to bear on her campus. Over the course of the 2016-17 academic year, Lindsay led an effort to increase recycling on campus, coordinated the campus environmental club, organized a group of students to demonstrate and pray at the St. Louis presidential debate, and planned several opportunities for her campus to engage the topic of Christian environmental action.

Lindsay was quickly becoming a leader in the Christian climate movement, and national media outlets took notice. Lindsay was featured on a national broadcast called ASPIREist--a CNN-run program which promotes inspirational stories and empowers the 21st century viewer to take action on issues that matter to them. Lindsay’s spot, which highlighted her work in her community through Y.E.C.A., aired to a national audience on Headline News Network for two weekends in late September, 2017. The feature was seen by reporters at both the Sioux City Journal and the Des Moines Register, leading to two online stories with the Journal and a front page feature in the Register, the most widely circulated newspaper in the state of Iowa.

Two years after Lindsay’s transformation in the mountains of New Zealand, she has become a national leader for Christian climate action. But we’re not surprised--both because of Lindsay’s natural gifts and because of the caliber of Y.E.C.A.’s leadership development programs. Lindsay’s story is only one of many that we could tell of those who have gone through the Project Leader and Climate Leadership Fellows programs and have come out with lifelong skills and abilities. That is exactly how these programs have been designed: to connect passionate young people to a supportive community and to offer them the tools and resources they need to develop the skills and abilities to become the climate leaders of tomorrow.