From the desk of our friend Lowell Bliss at Eden Vigil.

NOTE: Our delegation webinar originally scheduled for tonight has been POSTPONED. Stay tuned to future communications for the new date and time!

Two things you need to know…

“With over 2,500 signatories representing more than 130 million Americans and $6.2 trillion of economic output, ‘We Are Still In’ is the largest cross section of the American economy yet assembled in pursuit of climate action.” 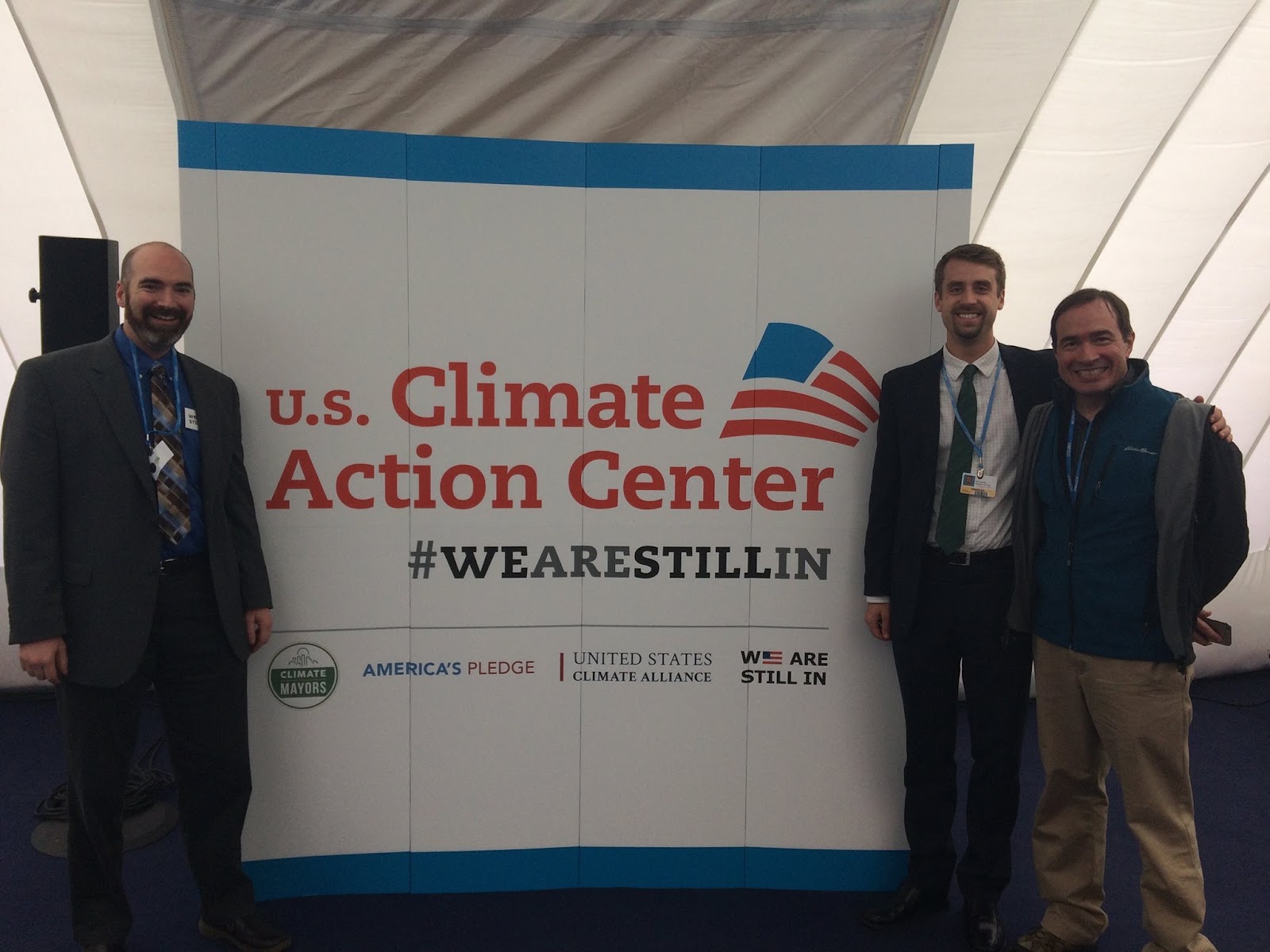 Thursday’s big event at COP 23, in our estimation, was the opening of the US Climate Action Center.  James Brainard, mayor of Carmel, IN stepped into the podium festooned with the logo “We Are Still In,” and declared, “Great countries keep their word when they sign agreements.  Great countries care.”

In June of this year, when President Trump withdrew the United States from the Paris Agreement, American state governors, mayors, university presidents, and business leaders all stepped forward, determined to provide leadership, determined to fulfill the US commitments under the accord, “with or without the federal government’s help.”  To date, 9 states, 252 cities and counties, 1,780 businesses and investors, and 339 colleges and universities have joined the effort.  In October, faith organizations also were given the chance to declare “We too are still in.” The effort is bipartisan. In Mayor Brainard’s town, 80% of voters vote in the Republican primary.  In the week after Trump’s withdraw, his City Commission, which is 100% Republican, unanimously passed a resolution: they care for the climate.

The US Climate Action Center is housed in its own set of bubbled domes, situated in between the Bula Zone of the UN negotiations and the Bonn Zone of the national pavilions and civil society.  The opening event was introduced by Lou Leonard, senior VP of World Wildlife Fund, who observed that the United States and the Paris Agreement share a least two important commonalities.  First, they both have distributed leadership: power does not rest in a single entity.  In America’s case, states and cities can make many of their own decisions regarding climate action without reference to Washington, DC.  Secondly, both recognize the great potential of subnational leaders and non-state actors, like businesses, universities, and faith institutions.

Follow the schedule of events at the US Climate Action Center, many of them livestreamed back to the States and Canada.

A word of encouragement for a weary American, with a special thanks to Canadians.

On Monday in the Bonn Zone, I (Lowell) was lamenting with Michel, a German man about the American abandonment of the Paris Agreement.  An apology formed on my lips.  Michel turned sympathetic.  “You know,” he told me.  “My mother was a young girl in West Berlin in 1944.  She remembers the Marshal Plan and the Berlin Airlift.  My family remains grateful to the United States.”

During the US Climate Action Center’s opener, the emcee introduced a video message from “an American who has spent more time in space,” Will Shatner. My wife, Robynn, is Canadian so it gave me a special pleasure to whisper loud enough for at least three rows to hear, “Hey, wait a second, he’s Canadian!”  Canadian readers, thank you so much for your prayers and encouragement during what has been a difficult time in the States.  As our Fijian hosts here at COP 23 are fond of saying, “We are all in the same canoe.”

Today is “Youth Day” at COP 23: pray for the young people rising up to create a more sustainable future.

One action to take…

Visit the “We Are Still In” website.  Send the link to your governor, your mayor, your university president, your boss, or your pastor.  Ask them to sign up.