Climate Caretakers, Young Evangelicals for Climate Action, Citizens for Public Justice, and the Climate Witness Project have teamed up to provide a collective public witness that Christians take seriously their call to protect God’s earth and to defend our neighbors. Representatives are in Bonn, Germany for the next two weeks, and are telling their stories, sharing prayer requests, and urging action in these daily newsletter updates. 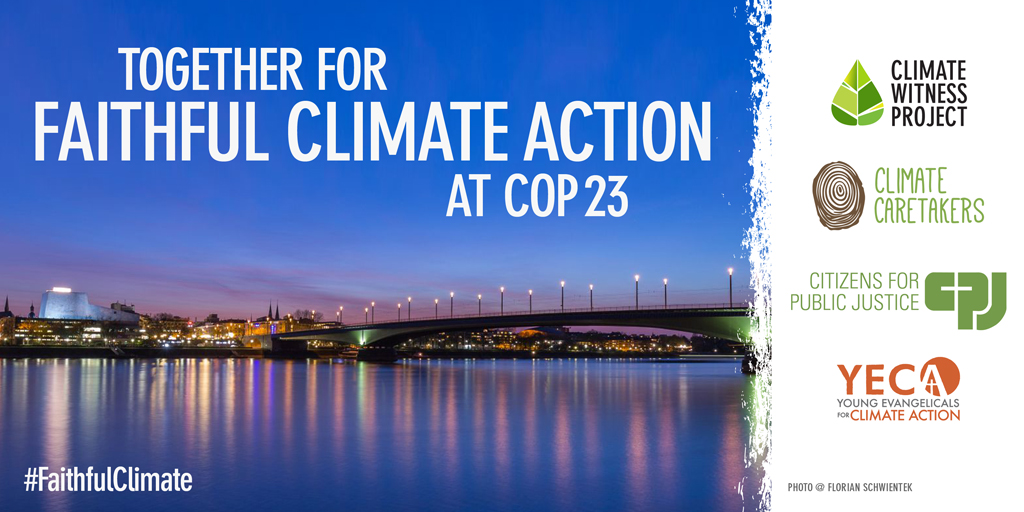 Two things you need to know…

Fiji Takes Up the Mantle

For the first time, a UN climate change conference is being presided over by a Pacific Island nation. Fiji assumed the presidency this morning in a beautiful opening ceremony highlighting the rich culture of the island nation. Fiji intends to take full advantage of its position to direct negotiations, highlighting the need to increase the ambition of each country’s decarbonization policies and to fully flesh out the mechanism by which vulnerable nations will be compensated for the irreversible damage caused by climate change (known in negotiation-speak as Loss & Damage).

They have even managed to infuse a dry, jargon-filled process with life and energy. The Facilitative Dialogue is one of the biggest outcomes of 2018. It is when countries will report on their progress toward their commitments made in Paris and will urge each other on toward ever more ambitious action. Fiji has proposed that the process be stripped of its dusty title and instead be dubbed the Talanoa Dialogue. “Talanoa” is a Fijian word that connotes respectful, trusting, and empathetic discussion toward deeper understanding and mutual growth. Parties seem to be taking to the new name. Let’s hope that they will be equally willing to embrace Talanoa’s principles in 2018!

During the opening session this morning, Germany made a surprise announcement that it would be contributing an additional $50 million euros to the Adaptation Fund. The Adaptation Fund was established in 2001 and offers direct access to funding for adaptation projects around the world. This means that farmers in Kenya and fisherman in Bangladesh can get access to critical funding to help them deal with the impacts of climate change, and all with a minimum of red tape. The goal for COP 23 was to raise $80 million USD for the Adaptation Fund, so thanks to Germany, we are well on our way!

One blog you need to read…

COP 23: Yearning Through My Yawning, in which YECA national organizer and spokesperson Kyle Meyaard-Schaap reflects on why he is Bonn for the climate meetings, what he is hoping for, and the struggles of jet lag.

Two items you need to pray for…