In the early days of 2012, a small group of young evangelicals met together at the home of an NAE Board member in Washington, DC, to prayerfully discern a faithful collective response to the growing climate crisis. We left that weekend retreat with the beginnings of a new national initiative called Young Evangelicals for Climate Action, and it’s been a remarkable and hope-filled journey ever since. 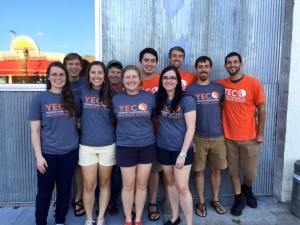 Serving as Y.E.C.A.’s first National Spokesperson and Organizer over the last three plus years has been a great and undeserved privilege. The work God has given us to do has not often been easy, but is has always been good. We’ve crisscrossed the country educating, organizing, and advocating for responsible climate action in our churches and in society. And we have witnessed these efforts take root and begin bearing fruit. It is a true blessing to be on such a worthwhile mission together with such a strong and unified team. 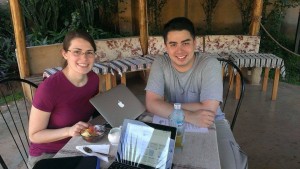 Ben and Rachel on a Y.E.C.A. trip to Kenya and the D.R. Congo

So it was not an easy decision to step down from my role. But I firmly believe that Y.E.C.A. will benefit from new, younger leadership, and the timing is also good for me to pursue full-time graduate studies. Therefore, about six months ago I notified my colleagues that I would be transitioning out of my staff role at Y.E.C.A. and the Evangelical Environmental Network by the end of 2015. I have a deep sense of peace over this decision, although it remains very much bittersweet to be leaving.

It is with great joy, however, that we have chosen Rachel Lamb to serve as our new National Spokesperson and Organizer. Rachel is a founding member of Y.E.C.A. and has chaired our Steering Committee for the last two years. A PK (pastor’s-kid) from Michigan, Rachel has both a B.S. in Environmental Studies and a B.A. in International Relations from Wheaton College (IL). She also recently graduated with an M.S. in Sustainable Development and Conservation Biology, along with an M.P.P. in Environmental Policy from the University of Maryland.

Rachel will serve in this role over the next year and help lead Y.E.C.A. through an intentional transition period as we ramp up our capacity and identify a new spokesperson to lead the movement in the longer term. I’ve been blessed with the opportunity to get to know Rachel well over the last few years—we’ve worked together closely and traveled to East/Central Africa twice now—and I can’t think of a more talented and dedicated leader to turn my role over to (you can read more about Rachel here). 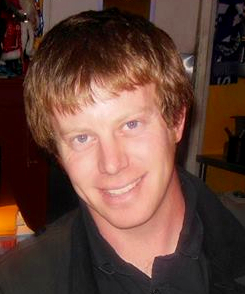 I am also grateful to share that Anthony Waldrop, who previously served as Y.E.C.A.’s Treasurer, has been selected to serve as our new Steering Committee Chair in place of Rachel. Anthony is an alumnus of Westmont College (CA) where he helped found and lead the Westmont student chapter of A Rocha, an international Christian conservation organization. After graduating, he served in a newly created sustainability role with Sodexo (Westmont’s food service provider) until moving to Washington, D.C., in 2014 to begin graduate school. I’ve known Anthony for a number of years now as well—we worked together at Renewal and he has also studied and worked at the Au Sable Institute and A Rocha Canada—and am fully confident in his leadership of Y.E.C.A.’s Steering Committee.

Between now and the end of 2015 I will remain directly involved in Y.E.C.A. as a Senior Advisor, while increasingly transitioning responsibilities over to Rachel and Anthony. One thing I am sure of—Y.E.C.A. is in good hands. God has blessed and established our work ever since that humble first gathering of young evangelicals seeking a way forward on climate action in 2012. And God has continued to bless us through two faithful leaders in Rachel and Anthony who are stepping up to take Y.E.C.A. to the next level. I’m excited for how God will use them—and how he will continue to work in and through Y.E.C.A.—to bring hope and transformation in one of most defining challenges and opportunities facing our generation and the world. Onward!